Be an Aviator Not a Pilot is a story of Pilots in Aviation who are unable to cope.

This is not a book to teach you how to get into an Aviation School or even how to live like a Pilot. In fact, it describes how one can become a Successfull Aviator not just an Airplane Driver [ So called Pilot ] with very small changes in life. 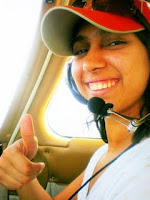 The Baron B 58 Story

Flying...the most exotic journey, challenges to do a little more better with each flight.

This was my first cross country after achieving my Private Pilot License.

I was very excited about this flight, as now I will be able to explore more Airports
then previous monotonous flights.

I decided to take my friend Rahul along, as a passenger as well as my safety Pilot
for my cross country.

So with all the energy and enthusiasm I and Rahul planned a long cross-country,
covering four Airports. We had long distance to cover.

With perfect planning and briefing, we were ready to go.

Weather was good; we had calm winds and clear skies.

As we hardly get any air traffic and thus we rule the sky.

We departed in our Piper Cherokee that’s a light aircraft designed for flight training .
We took off from Arlington my base Airport, at 22:00.
It was pleasant weather, and view of our city from 8000 ft at night was simply
breathtaking. So enjoying the ride, we landed to our first destination Stephenville.
It has a small uncontrolled Airport. We decided to halt there and enjoy some time in
famous barbeque located close to Airport, which also provide golf cart in Airport to
reach barbeque.

After landing we taxied to parking, it was dead dark, there was a beechcraft Baron
parked in there.

Parking my plane next to beautiful Baron seemed a good idea.

It was hypnotizing, the sleek Baron, Was in my own fantasy world while passing the
Baron on my right. Hitting it with my wing tip woke me up.

Banggg....!!!. I freeze but managed to quickly cut the engine power, it was too late
though, we looked at each other in astonishment, thinking where to start from.
At last we came to life and took some vital steps before examining the damage.

After shutting down our plane, we pushed it at proper place, and parked it.

Then we went to Baron, and examined what I have done to it.

It was a deep dirty dent in its left propeller governor unfortunately given by me and
we could feel some deformation inside by touching it.

We were speechless; all the excitement flees away!!

We headed back to our plane and were sitting inside, wondering what to do next.

All the excitement was gone, I was wondering, Ohh...I have just banged my plane
into another plane double in size of my plane. What my instructor will say, my friends
think of me, above all what if I have to pay for it all.

In this moment of dilemma I see Rahul suddenly smiling, I couldn’t stop myself
punching his nose but before I can do that he said-Hey ,at least our plane is alright,
look at our super duper wing, it’s still shining after hitting the Baron. I saw my plane
and he was All right, under that stress it felt nice to feel good about something.

By now my brain was stabilised, and we started thinking what can be done.
There was no one in vicinity, no plane, no person just nobody other then four
of us. Yah me, Rahul, our Cherokee and angry Baron, it felt as if he was staring
at me like a wrestler who just got his nose broken.

Anyway it would have been very easy for both of us to escape from there as nobody
saw us.

Still none of us had strength to just leave Baron like that.

Because inside I knew it was a blunder, my conscience couldn’t allow me to run away
just like that.

Finally we together made a decision to leave a note mentioning my name, contact details,
apologizing and specifying what I have done.

We took off and came back to Arlington. As we knew the tail number of the plane we
wanted to know who does it belong , and how much new governor of Baron can cost
us in case owner ask us to pay.

We thought not to tell this incident to anyone and pay the owner for governor so
nobody in flying school will come to know, and we will be safe from their anger.

We came back to Arlington, our flying school was locked.

But we have a broken window their big enough for a person to get in.

We got in through the window like thieves, switched on the computer and searched
the owner of plane .It was a Private plane owned by Mr. Donald, who lives in
Stephenville itself.

And the cost of governor for that plane started from 2000 $.

One day passed but we didn’t receive any call from that man.

I thought maybe he won’t call ever.

But still somewhere inside I was guilty and I told Rahul that I want to tell everything
to Capt. Miloud, who is our school director and owner, and also our examiner.

He is supposed to know everything happening with his planes and I will feel relived
too.

Thus we went heading to Capt. Miloud and narrated entire incident to him.

I could see his burning anger. He explained me how important it is

To taxi slowly, and explained me in detail every step to be kept in mind while taxing.
Those things became my guideline and I clearly got a lesson for life long.

At the end he appreciated me for being honest to him and said he is proud of it.

Wow...These instructors know it, how students feels, those magic words by Capt. Miloud in the
end changed everything.  All the guilt was gone and we were fuelled back with
energy.

However it didn’t end up here.

After two days when I was doing my pre-flight check for my flight I got a call from an
unknown number, and not really to my surprise it was an old angry man on phone
and said –I am Donald calling, Is it Rita?

He said-What have you done to my plane.

Are you a CPL holder?

I said-No sir, I am a Private Pilot.

Which school are you from; I want to talk to your instructor.

I gave him Capt. Miloud’s number and he kept the phone.

Phew..!! This man sounds so disturbed ..he will definitely not leave me like that

It would have been impossible to deal with this man alone. Thank god I said everything
to Capt. Miloud already.

He called Capt. Miloud and was asking more than $ 5000 to pay him for his loss.

Capt. Miloud has been in aviation for more than fifty years, he knew it he is asking way more.
Capt. Miloud said him that he will get broken part of the plane for him

My flying school got a new propeller governor for the Baron for 1800 $, out of which


He decided to pay 600 $ from his side as gift for my honesty, even Rahul wanted to
contribute and he did. I had to pay 700 $ from my pocket.

I myself along with Rahul took a flight to Stephenville with new governor for his
plane. On my way I was wondering this guy owns a Baron worth $ 1320 000, still
he wanted to make money out of me.

I nodded my head.

Good things happen to good people. I smiled back to him.

Soon we could see the runway. We landed at Stephenville Airport.

There we met this man Donald.

I introduced myself to him, and he asked me about his part.

We handed it to him.

Then he said us his part of story that he didn’t read the note we left at first.

He was just about to start his plane when he saw the note attached to windshield .
When he read he checked his governor and came to know about it.

It felt as shockwave ran inside us. This man missed dented governor in his
pre-flight!!!!

And there might have been any problem up in the air.

If anything like that would have happened I throughout my life would have not been
able to forgive myself.

I felt so fortunate and great for the right decision I made.

Following your heart gives the satisfaction and the ultimate power to move on.

I was so proud of myself and I turned to Rahul and said.. It’s not always about money.

Listening to your heart, being honest with yourself can give you joy which no
money can buy,

I was amazed by the fact that how each flight not only makes us a better Pilot but
also a better person.

Email ThisBlogThis!Share to TwitterShare to FacebookShare to Pinterest
Labels: The Baron B 58 Story
Newer Posts Home
Subscribe to: Posts (Atom)